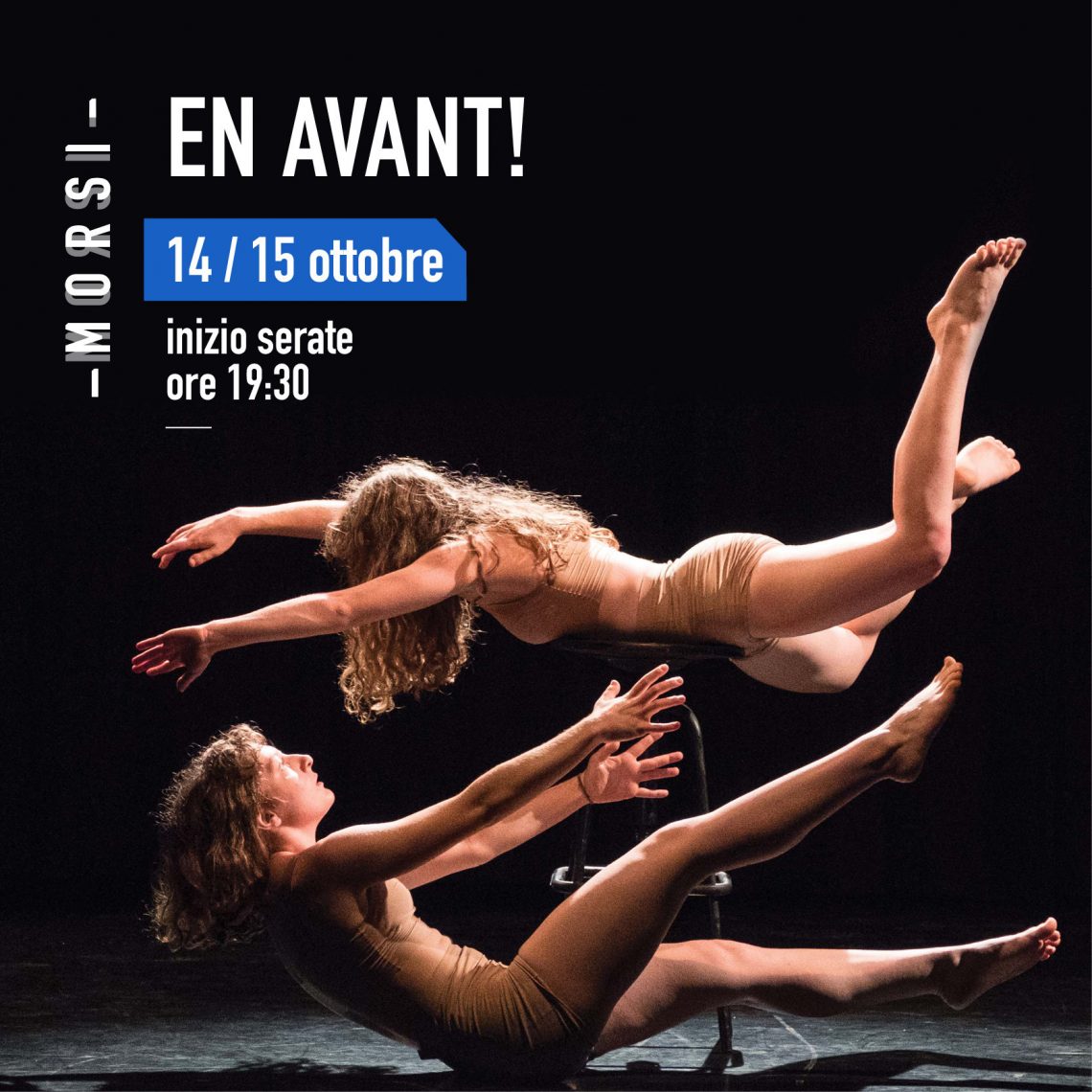 Two subjects find themselves sharing the same place. A space of the soul. This is the space they both frequent at least once a week, for some time now, in which they cry out their addiction, their complex, their anger.
The bodies tell their stories at the same time and in the same structure, all the time without knowing it. A common starting point to say something that the body will transform into dance.
The choreography investigates not only the emotional states of the subjects in their daily struggle to live, but also the relationship between a mute voice and a pawing body.
The project involves the audience in the simultaneous act of watching, analyzing and participating in the performance through an introspection of oneself and of the other (according to Grotowski 's idea of poor theatre, in fact, the spectator is not a mere passive recipient of a performance but an individual who, through the stimuli conveyed by the performer, wishes to self-analyse). The latter's communicative urgency is thus transformed into expressive urgency for the spectator. 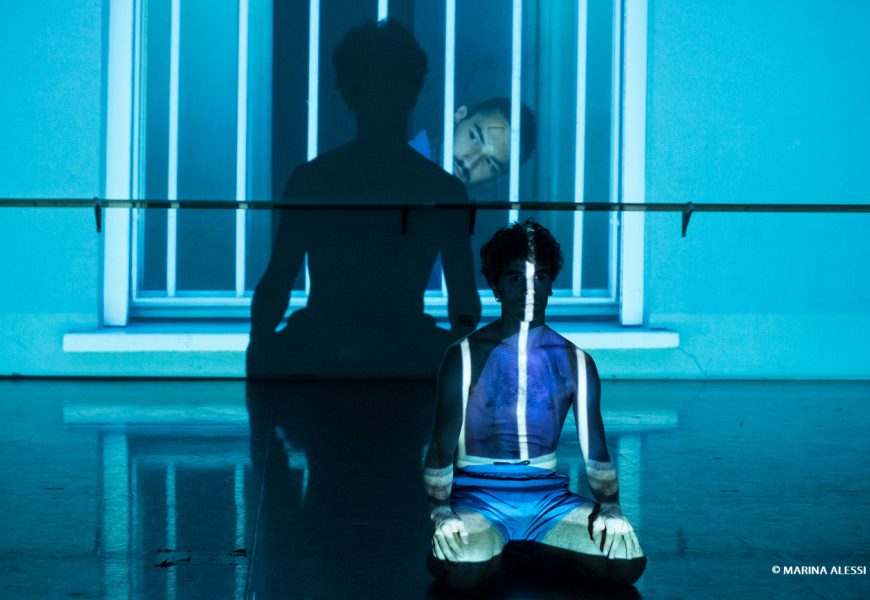 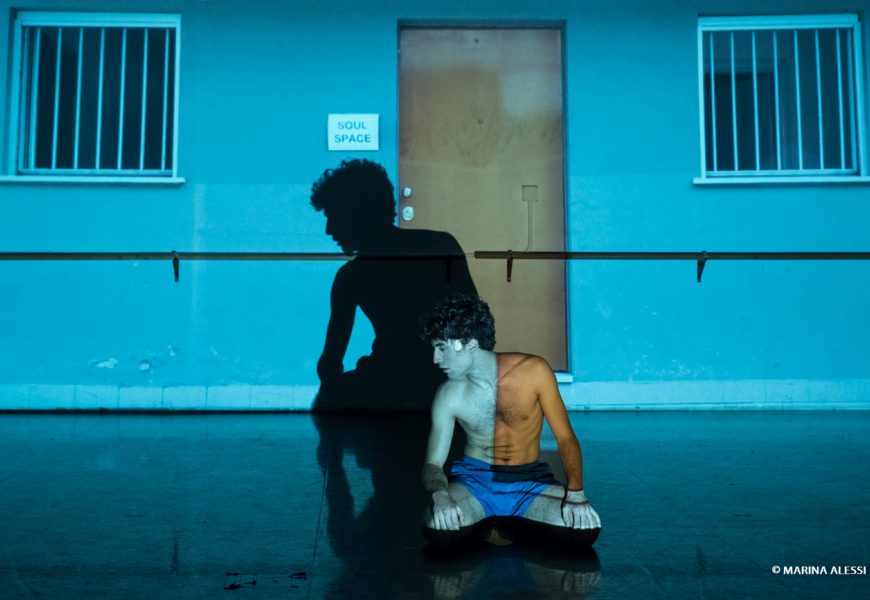 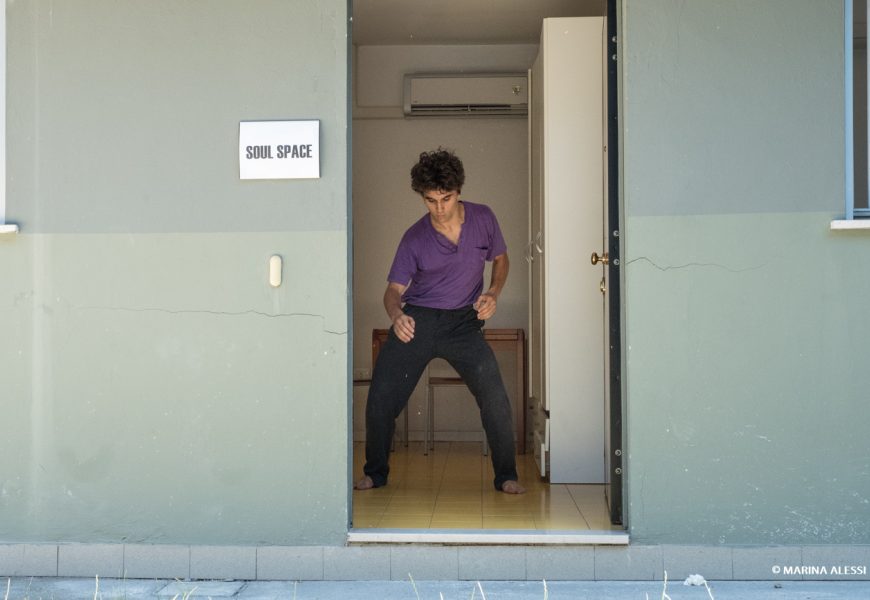 What would happen if individuals allowed themselves to release energies otherwise repressed by society?
What is the limit between what is legitimate and what is not? The work intends to explore the illicit, the censored, what would otherwise be inhibited and suffocated, but which in reality is a profound nuance of that animal feeling that inevitably distinguishes us.
The scene inhabited by the performers is one in which the body experiences strong power and pure submission, in the name of an individual liberation that necessarily passes through physical, even before mental, clearance.
The body oscillates between a fluid quality of movement and a clear spatial-temporal scansion, passing from moments of extreme slowing down and consequent "stops" to other more concise and impulsive moments. 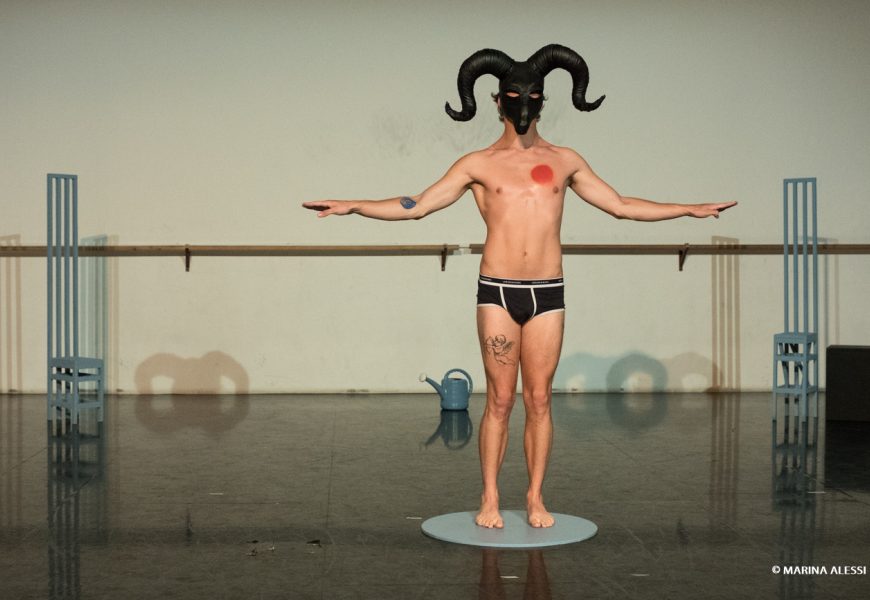 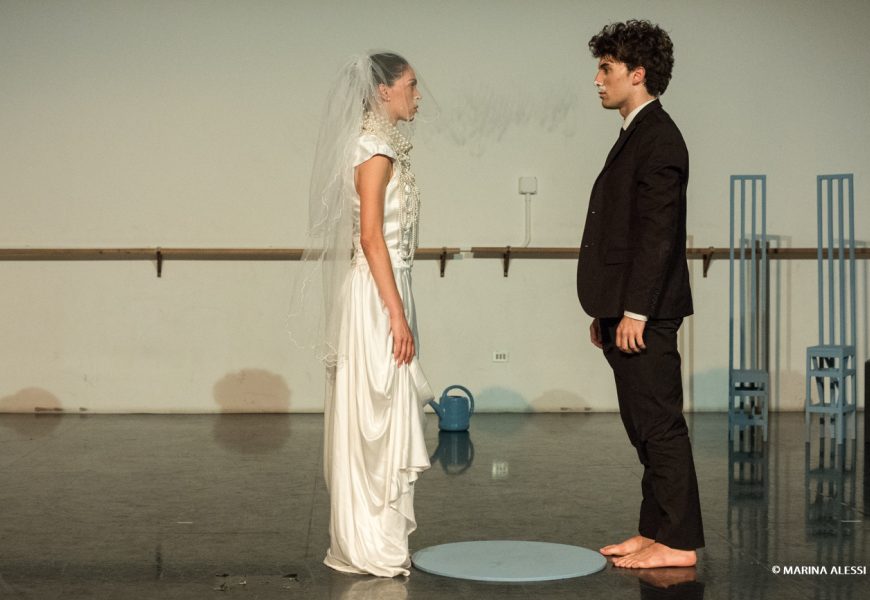 choreography | Lautaro Muñoz
performers | Deborah Congedo, Federica D'Aversa, Isabella Moretti, Rafael Candela, Caterina Cescotti
This work is based on some fragments of the Romanian nihilist current of the 1930s/40s. 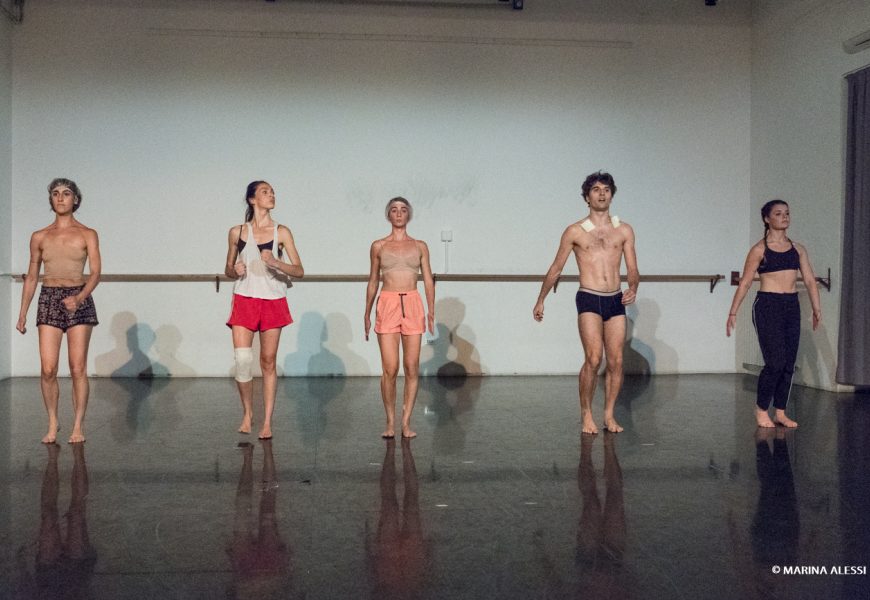 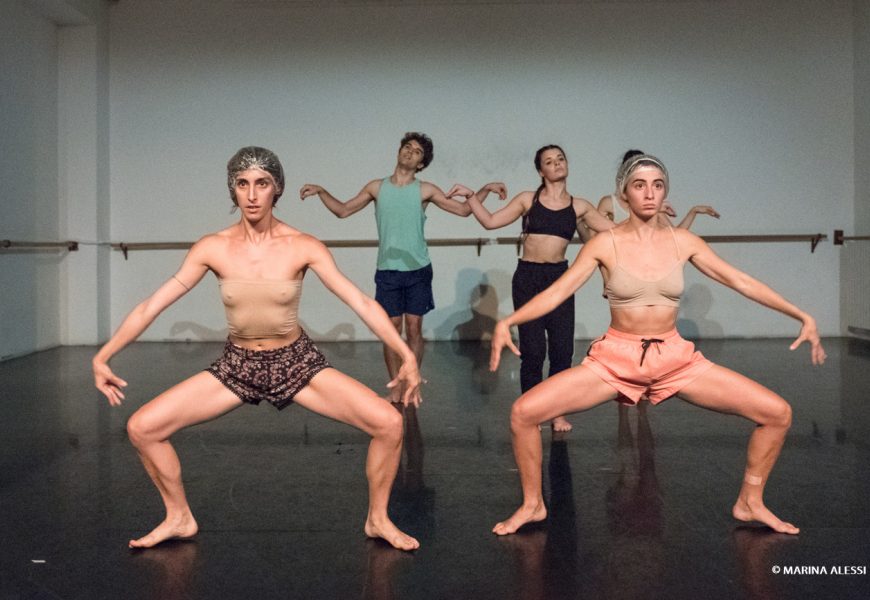 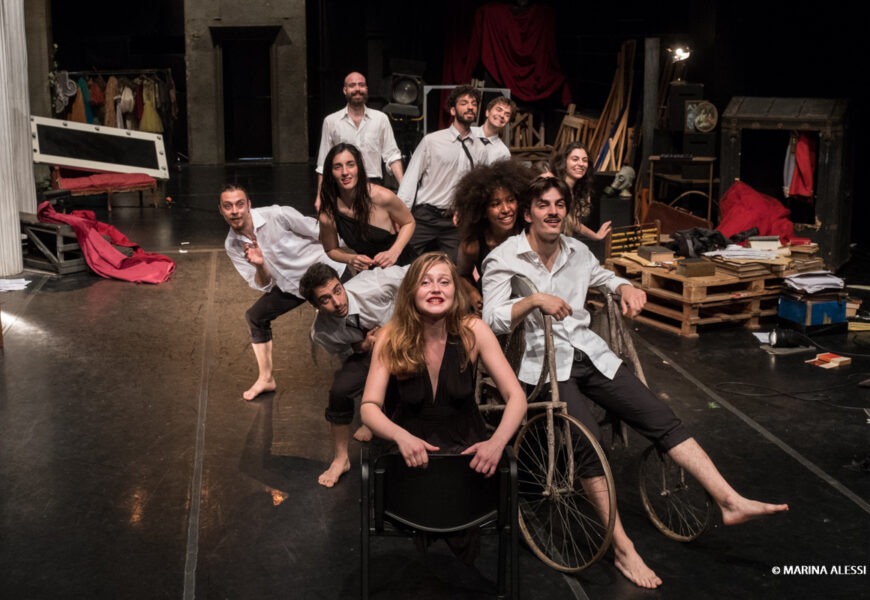 Newton's third law of dynamics states that: for every action there is an equal and opposite reaction. This principle of action-reaction inevitably dominates all aspects of our lives. In fact, immobility is impossible in relationships, but a constant search for balance is necessary. This is what '22' is all about: the eternal search for balance. Within these strict laws of physics two elements become aware of the fact that the individual cannot exist alone.
Existence linked to the need for security precludes freedom and with it real contact with the other. The need for an active relationship leads to the risk of abandoning one's own security, but if contact occurs, connection is kindled. The exchange and mutual listening finally lead to balance, actively renewed at all times through movement.
Thus, even without constraints, two elements can be linked but free. 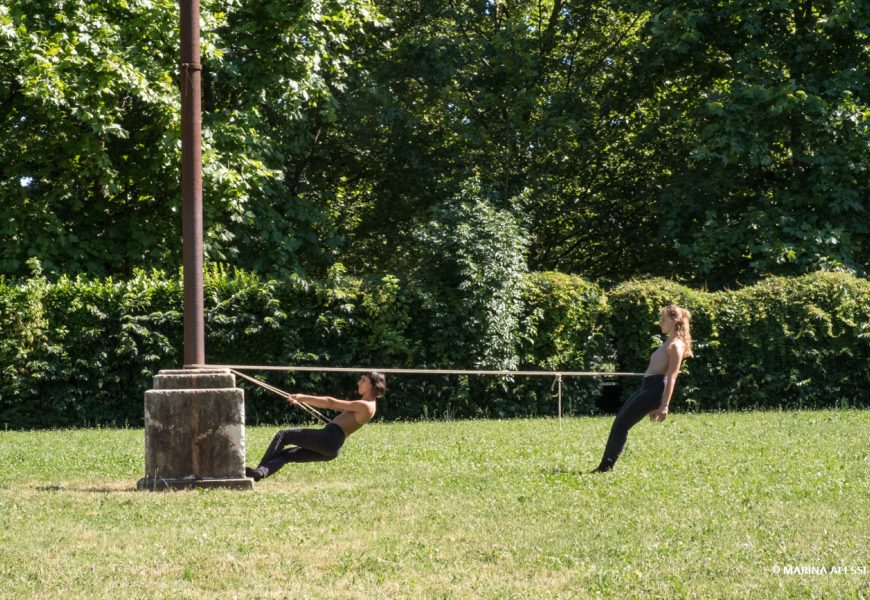 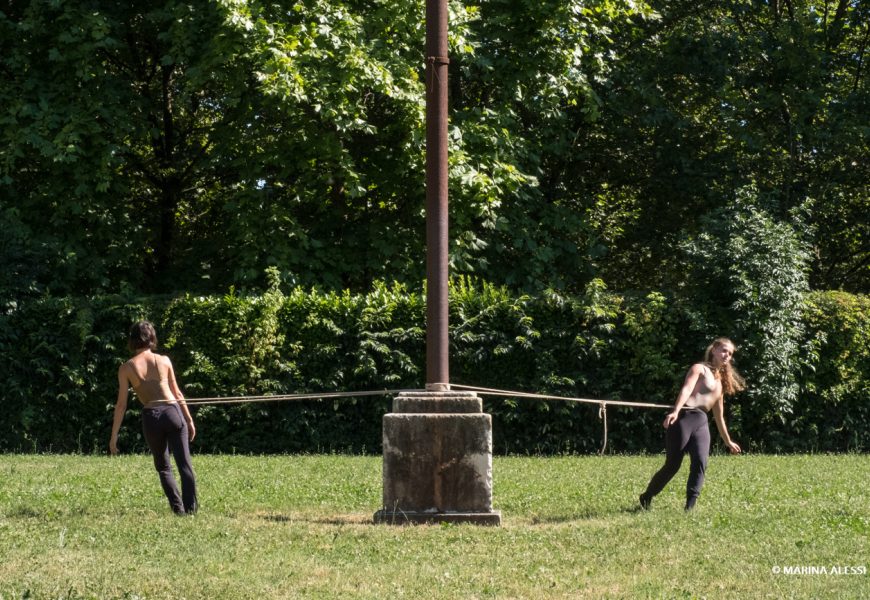 "We shape our tools and then our tools shape us".

Is it a certainty that our bodies belong to us? Is it really taken for granted to think that it doesn't lie or that it is natural? COrpse explores the theme of the body-object, subjectification and its boundaries. But above all, it investigates the voluntary disposition of subjects to become objects, to reify themselves in the name of compassion, love, curiosity, discipline.

How much are we really willing to lose ourselves in order to orient ourselves within a system? And what is the risk of becoming products, ready to be discarded, visible to everyone but not to our own eyes? 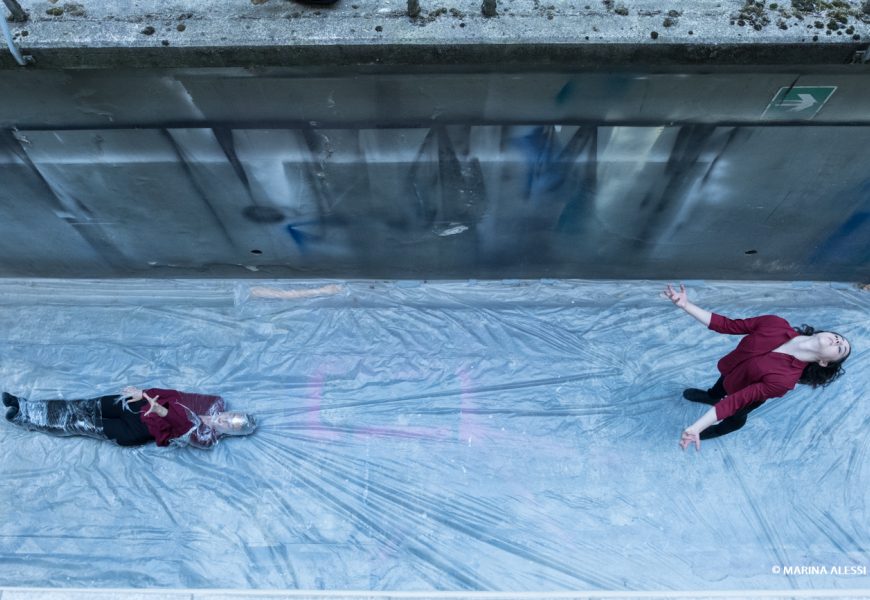 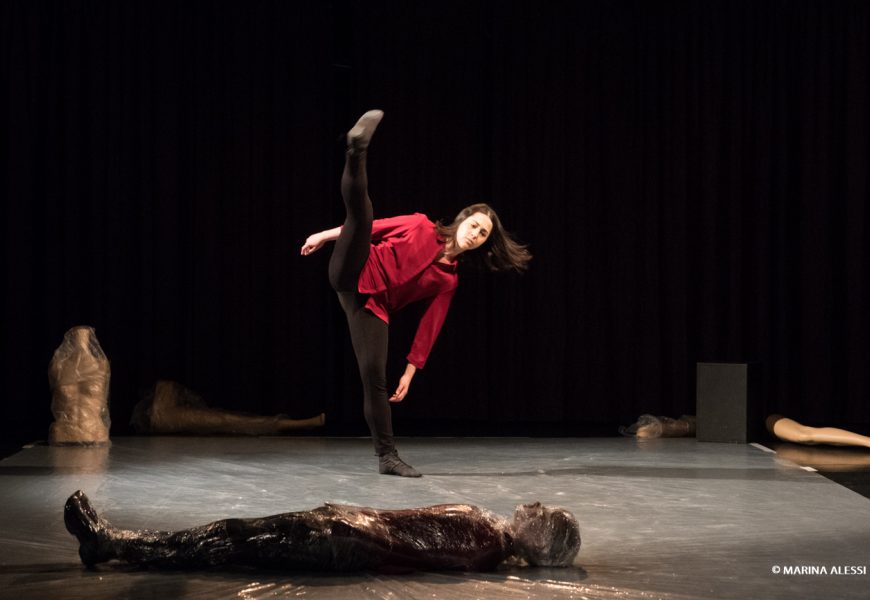 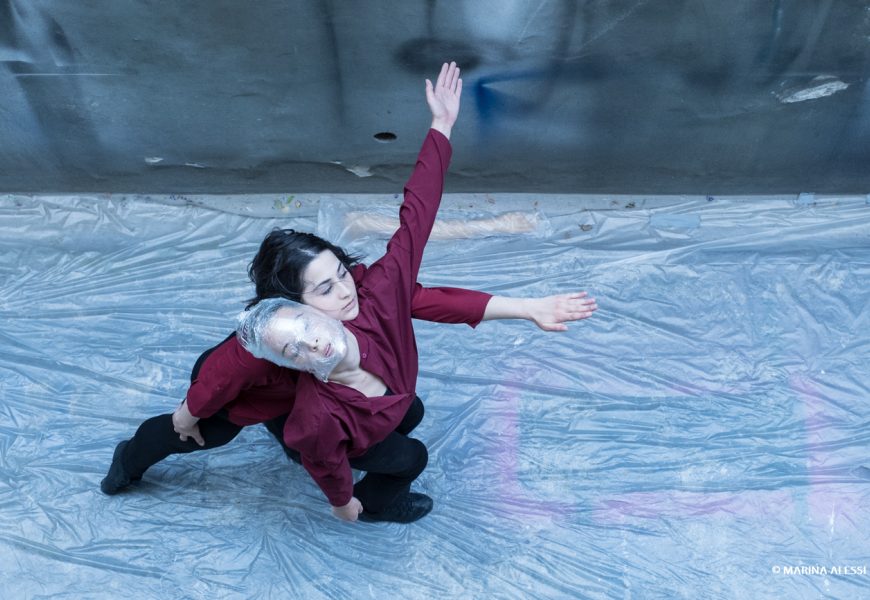 We have been the same person, we have been the same flesh, we have been the same breath, and then something decided that that one was not enough, that from that one should be born another life. We are each other's daughters and mothers. We have been generated from our own flesh. We have been born twice. Now we are two, alive, with the same physical features and with all our wandering, stumbling and struggling with what we cannot control: our origin, our history, our birth, written on our skin, inherent in our equal way of breathing, walking, arching our backs, talking on the phone. We dance and fall to try to be in the world, in a world that is attracted to what is between us and at the same time yearns for our separation. A world that has played "guess who" with us, that has taken our names from us and in the meantime has asked us curiously "how do you do it? What does it feel like?"
Me. You. Me and you. You and me. Us. Them. Us and them.
Two bodies embodying and "unembodying" 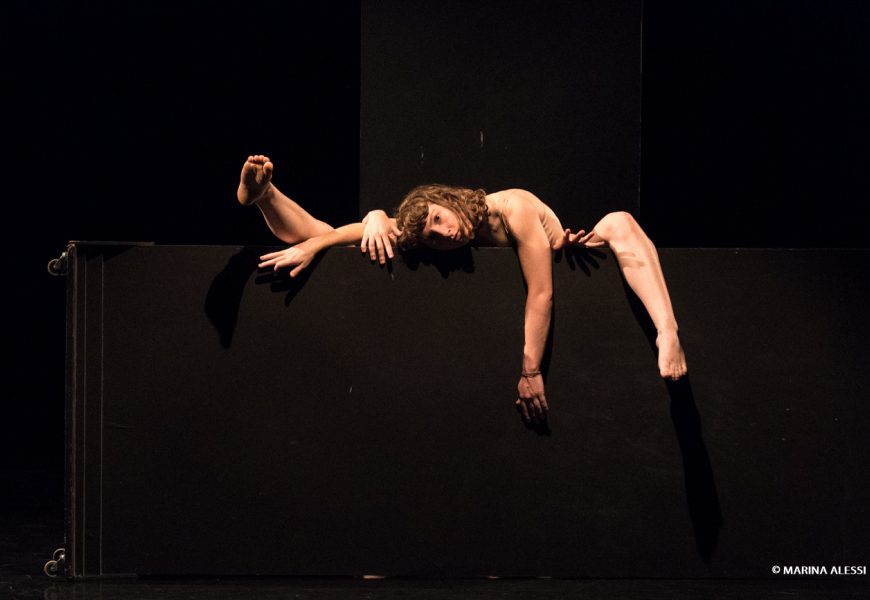 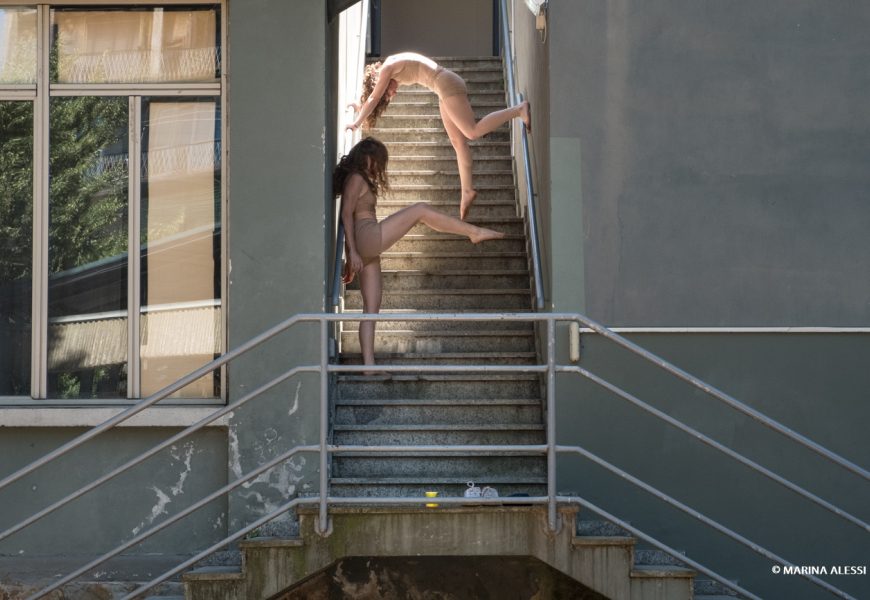 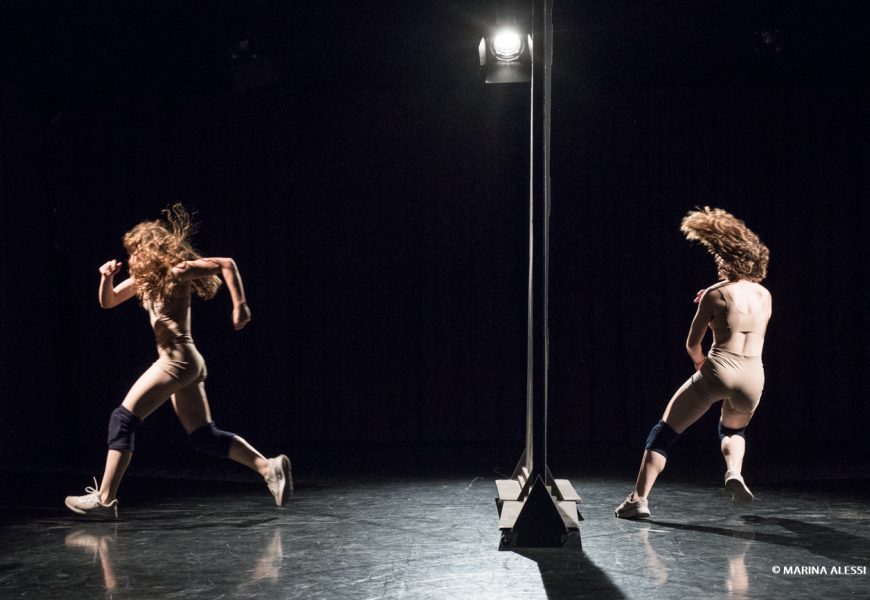 A body that only needs to be, does not tell, does not expose themes.
Starting from an essential condition of listening, the creative process aims to explore through dance the relationship with time.
through dance the relationship with time and space. Visual, tactile and sound perception constitutes an experience that allows the body to inhabit space through an increasingly complex elaboration. Space through an increasingly complex elaboration of articulated movements.
Like an eye that learns, absorbs, stores and returns, the body elaborates its own identity. 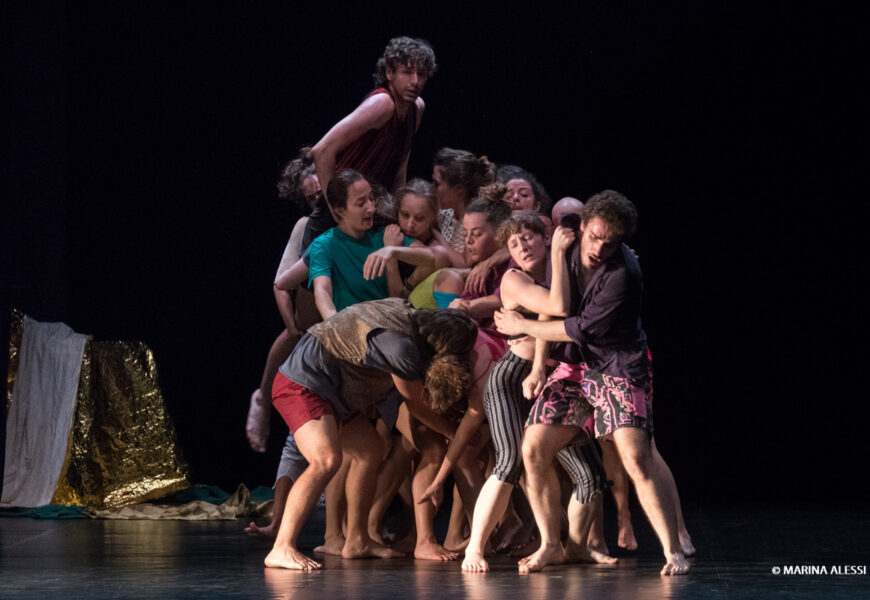 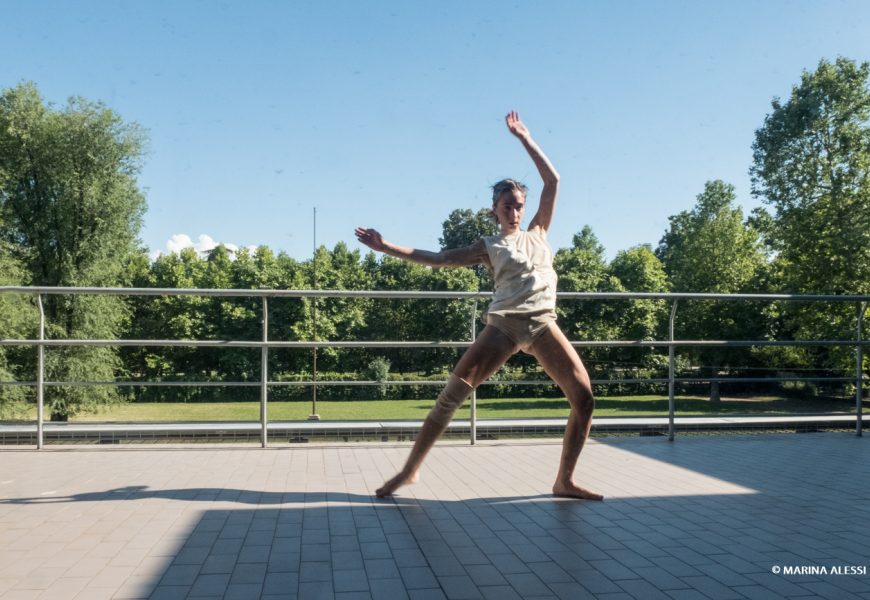 Two bodies inhabit the space.
The necessary process of discovery and definition of this same vital space will allow them to define its limits, possibilities, memory, errors and needs. In their repeated research, which is presence and absence of self and other, zero and one, they will discover in the reciprocal visual connection a mirror in which to recognise and rediscover themselves.
Forcibly confined in a space-time loop, dilated and at the same time demolished by the external eye of the camera, the two bodies on stage will experience the urgency of having to give life to a single creature, free only in the presence of the other, opening up other infinite spaces that exist according to unknown rules.
In the encounter, the stringent geometries of the solid structure in which the bodies are incorporated will allow their liquid and mutable nature to find a different sustainable and observable form.
A new dimension, governed by the surface tension of the two opposite states of matter, which becomes the field of exploration of oneself, of the other, of the invisible. 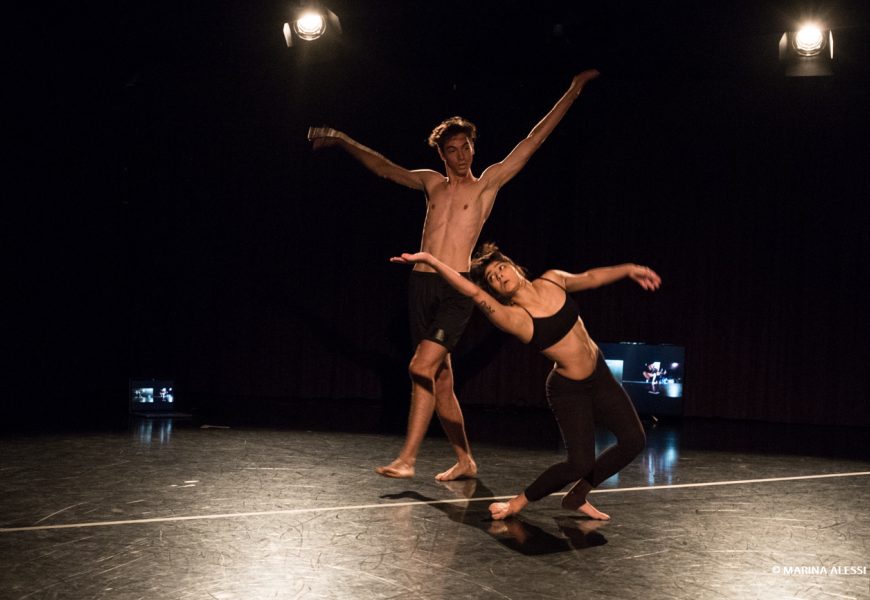 A city with no buildings or roads, "except for the water pipes that rise vertically where there should be houses". Among Italo Calvino's Invisible Cities, Armilla is a place "abandoned before or after being inhabited". Life in this place flows like water in the ducts only thanks to the nymphs that populate it, mythological creatures that exist par excellence when they escape the gaze of man, living only in the perimeters where they can move undisturbed in their natural element. What happens to a city when it empties out? What happens to places when the human element is missing? The absence
The absence of man opens up the possibility for the autonomous life of spaces to emerge. Armilla's nymphs, whose feminine presence is the representation of nature itself, overturn the myth: they no longer flee, they no longer propitiate fertility, but stare the spectator in the eye, reminding him of his condition of fragile inhabitant, of guest in a world that will continue to live, even without him. 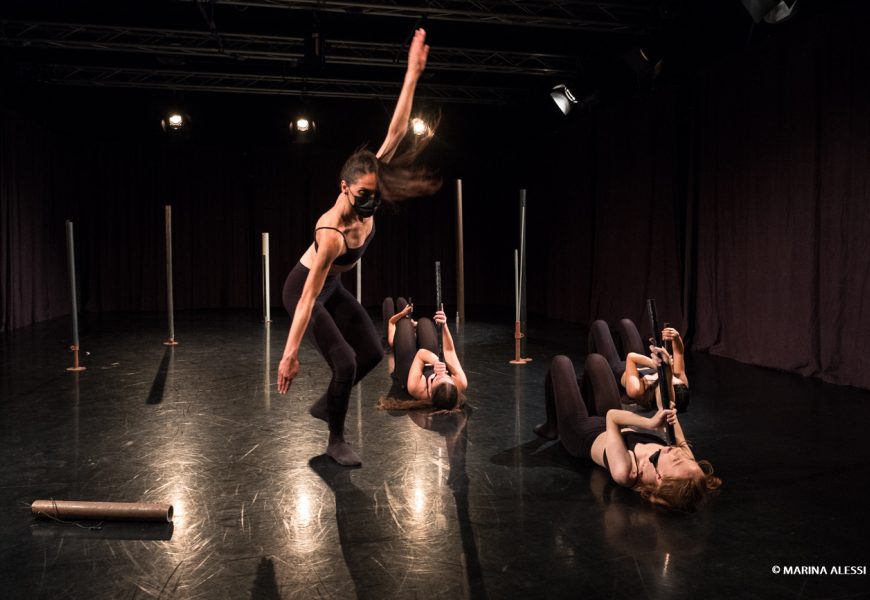 Is a body just a body? Mine is a body that wants to be free: not limited in a binary gender system, not sexualised by the outside eye. My body observes itself and is observed in its every movement and detail. My body explores a fluid gender: man, woman, both or neither.
What do you dwell on when watching a body move that is devoid of or filled with gender stereotypes, which have become entrenched in society?
The solo is based on reflection about gender fluidity, the ability to freely become one or more of a number of genders for any length of time and for any number of changes. In the project I look for a quality of movement that draws from the whole spectrum of genres and then breaks free from it aspiring to be energy, dynamics, strength and presence. The movements performed experimenting with an androgynous style create gender euphoria. 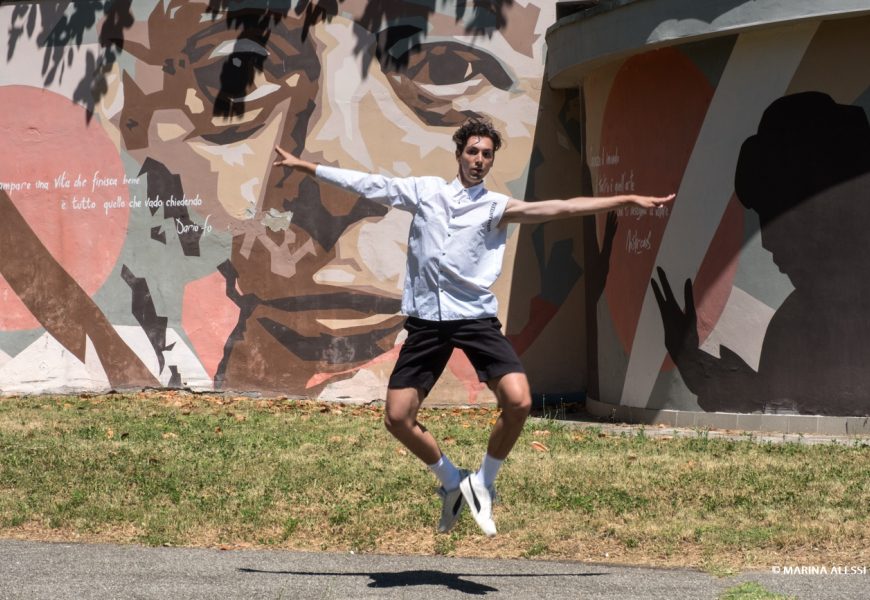 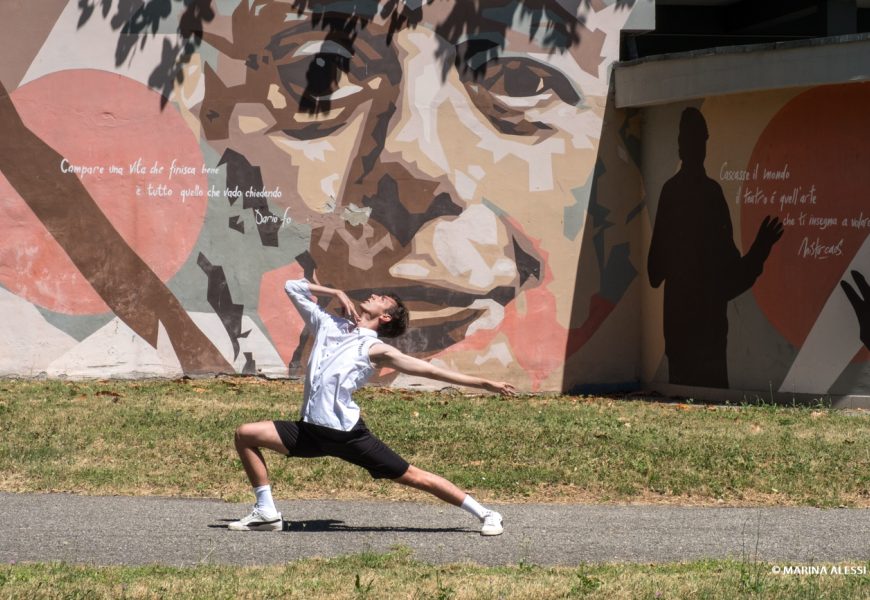 "When I know your soul I will paint your eyes".
Amedeo Modigliani
From 1917 onward, Amedeo Modigliani devoted himself to portraits of Jeanne Hébuterne in which the absence of the soul is manifested in the physical absence of empty eye sockets and blind gazes. And yet these portraits seem to retain a soul if we are almost magnetically attracted to them among the paintings on display in a museum, and perhaps even more so than we are to their sister portraits in which the eyes are finally revealed. In the physical absence and absence of consciousness, the true primordial essence of the human being seems to reveal itself in all its power.
What does it mean to seek this essence through absence in a living body?
Ritratto di un'assenza (Portrait of an Absence) is a study that aims to bring to light what it is possible to find of authentic and essential in a human body emptied as much as possible of its consciousness. In a total performance inspired by the visual arts, the performer's body, alone on stage, dictates the choreographic structure of a ritual leading to the progressive abandonment of the state of consciousness to reveal the surviving essence to the witnesses.
In an increasingly distant world in which the theatre has been promising for years to pursue and elevate to the utmost power the presence and consciousness of the performers on stage, what does it mean to seek their absence? 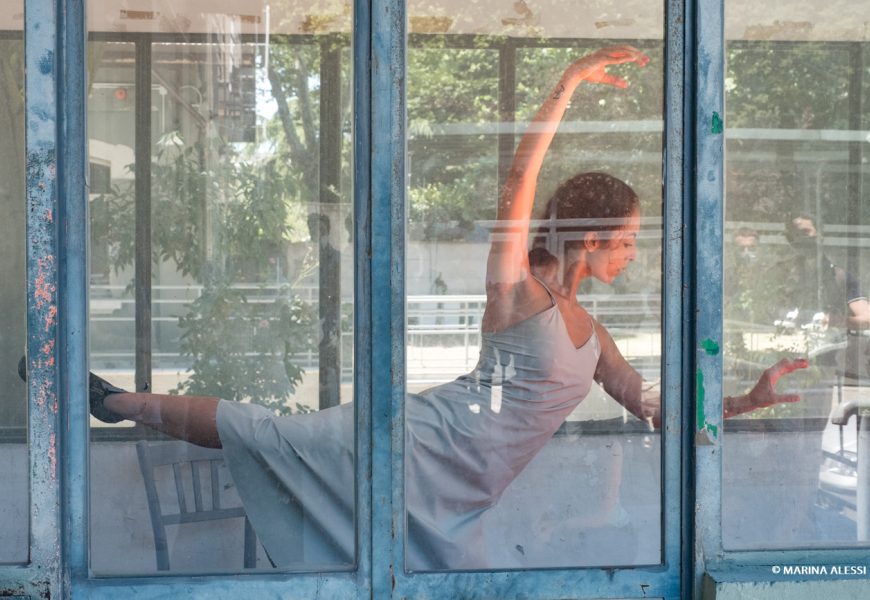 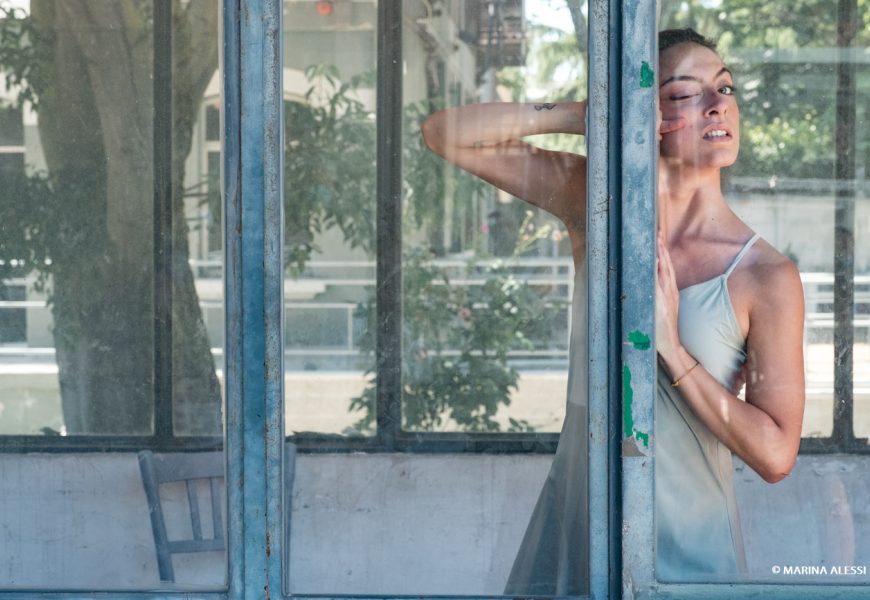